Making the most of the middle-aged micro (1)

There are comparatively few reasons to remember Saturday, February 6th, 1982. No world-changing events, no particularly memorable births or deaths. In the Five Nations, Wales scored a notable victory in Cardiff against France (a fact I didn’t have to look up), beating them 22-12 (a scoreline I did have to check).

Far more significant for me, though, was the object my parents brought back from their day trip to Cardiff: freshly bought from WH Smith on Queen Street, a Sinclair ZX81. It was my first computer, and it’s fair to say it had quite a drastic influence on my life.

The microcomputer, a category into which we can definitely place the ZX81, has undergone a mini-revival in media studies over the past year, thanks to Tom Lean’s encyclopaedic one-volume account of the period, Electronic Dreams, currently at pocket-money price on Kindle, and the first truly British platform studies book, Alison Gazzard’s Now the Chips are Down, about the BBC Micro. Both are excellent and heartily recommended. Today I’m forced to reflect on the fact that, at least by the Biblical definition of threescore years and ten, my interest in computers is now exactly middle-aged, as I suppose, by extension, am I.

It’s too lazy to categorise the recent resurgence in writing about the micro as simply being the product of academics reaching a certain age (and inaccurate too; Gazzard’s book has been five years in the making, and Lean has been researching the field for over ten). Rather, it’s the fruit of a growing realisation that the early-to-mid-80s UK micro boom was a hugely culturally significant event, a definably geographical one – no other country took the micro to their heart in the same numbers – and one which still reverberates today, in kids’ coding initiatives and tiny single board computers. 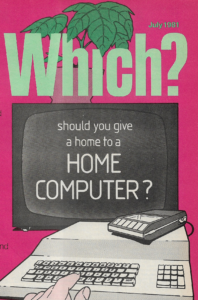 Yes, Dad, you really should. Go on!

So what of the ZX81, my introduction to computing? I’d longed for one for the best part of a year, my interest being piqued by an article in my dad’s Which? magazine the previous July, talking all about these new-fangled home computers and what people did with them. That, I think, was the first time I saw any computer code in print, and I felt mesmerised by it – a portal into a new age, and something I instinctively knew I could Do Something With.

The following month, Which? conducted a group test of about a dozen micros, from manufacturers as diverse as Acorn, Apple and Tandy, but the one that stood out for me was the ‘very cheap’ Sinclair ZX81, at a price of £73 including postage, though with a warning to budget an additional £50 for the extra memory. Turning the page from a mediocre review of the Apple II Europlus at an eye-watering £799 (an early data point in the ‘Jobs tax’ graph), the value-for-money of the ZX81 seemed like a revelation.

In many ways, it was. I wasn’t to know at the time, but the ZX81 was 1981’s successor to Sinclair’s ZX80, its name being taken from the cheap Z80 processor at its heart and its year of launch with, it seems, an X for extra mystique. The ZX80 was sold by mail order for £100, and is a very early example of what Lean calls an ‘appliance’ computer. Before this, micros were the preserve of the hacker, the tinkerer, the maker, the person generally handy with a multimeter and not afraid to get their oscilloscope dirty. As names like the Compukit UK-101 would suggest, they’d usually be built from parts, with components soldered onto the board (or, in the case of one particularly hapless Acorn Atom builder, glued instead). The ZX80, though, was different – designed to be plugged in, attached to your TV, tuned to a spare channel, and to then be ready to use. Slightly less complex than plumbing in a washing machine, and as ready-to-go as a toaster.

What I did find out over the coming months, thanks to Sinclair Research’s blanket advertising campaign, with double-page spreads appearing regularly in my parents’ Sunday Times magazine, was that somehow the ZX81 was cheaper than the ZX80 at a time of high inflation, and contained less than a fifth of the main parts – just four chips, as opposed to its forerunner’s 21. This, I later learned, was due to Sinclair commissioning Ferranti, the UK electronics manufacturer, to combine the majority of its functions into a single chip. Manufactured at volume, it was a significant saving for Sinclair once the design costs had been covered, it meant less to go wrong, and it meant the parent-pleasing ‘very cheap’ price point of £69.95.

I asked for a ZX81 for Christmas. Instead I got some Plastercasters, which I think I enjoyed making, but which were no match for Sinclair’s machine. My parents, realising that their son’s computer obsession was likely to be slightly more than a passing fad, eventually capitulated six weeks later. 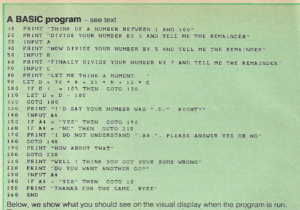 WELL I THINK YOU GOT YOUR SUMS WRONG

I spent some of that time writing variations on the program I’d seen in Which? six months previously: I didn’t fully grasp its algorithm, but could work out the basics, and knew that I could, by tweaking a line here and a line there, make the code my own, a process, I’m sure, replicated in bedrooms up and down the country. It may have been a new world, but to the legions of teens and pre-teens looking in, it felt like theirs to own.

The ZX81 box arrived from Cardiff under strict instructions not to play with it until after school on the Monday. I obeyed, and two long days later plugged the computer into what was then our second TV set, an elderly black and white ITT model, newly usurped by our colour one. I plugged the computer in, moved the tuning button up and down the dial and… nothing. Not the slightest flicker of anything on screen, other than analogue static. Puzzled, my parents phoned our television repairer (an occupation I have intense difficulty in explaining to most of my students: they used to repair televisions?) He’d seen it all before, and said he could come out and modify the set so the computer could be used. Tactically, my parents timed his visit for two weeks later, in the middle of half-term holidays, perhaps anticipating the new computer’s capacity to suck up all my time. After all, early 1982 was still at the tail-end of three channel television, with daytime TV a good four years away, our first expensively rented Granada VCR more than three years in the future, and multichannel simply a pipedream. As far as home entertainment went, a computer attached to your telly was one of the few games in town. 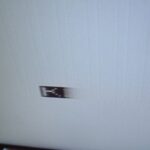 We repeated the process of two weeks previous. Plug in, computer cable to the TV aerial socket, fiddle with the spare button until, miraculously and, to me, entirely unexpectedly, it worked, and a slightly fuzzy white-on-black K appeared in the bottom left of the screen. This was my Rubicon. I wasn’t going back.

This entry was posted in English. Bookmark the permalink.